Faced with rising prescription drug prices, dozens of states have moved aggressively over the past year to propose ways to turn back the tide.

That's not just out of the goodness of their hearts. States themselves are hit by drug costs via public employee health plans, Medicaid and other programs.

"States have balanced budgets, and they're reeling from unpredictable and rapid drug price increases,” says Trish Riley, executive director of the National Academy for State Health Policy (NASHP), a group of policymakers. Fixes at the federal level might not be speedy enough, she says. “States can't wait."

But only a fraction of bills ever become law. And in February activists suffered a setback: The U.S. Supreme Court let stand a lower court decision striking down a Maryland law that would have let the state prosecute generic drugmakers for “unconscionable” price hikes. The lower court had ruled that the law, endorsed by AARP Maryland, violated the constitutional prohibition against states regulating commerce beyond their borders.

The ruling did not bode well for similar bills that had been introduced in a dozen other states. But it may have a silver lining.

"It was a rallying cry,” says Elaine Ryan, AARP's vice president of state advocacy and strategy integration. “Our state office and advocates are back trying to formulate a law that will actually pass muster."

Here are some of the most promising state-level tactics for reining in drug costs. 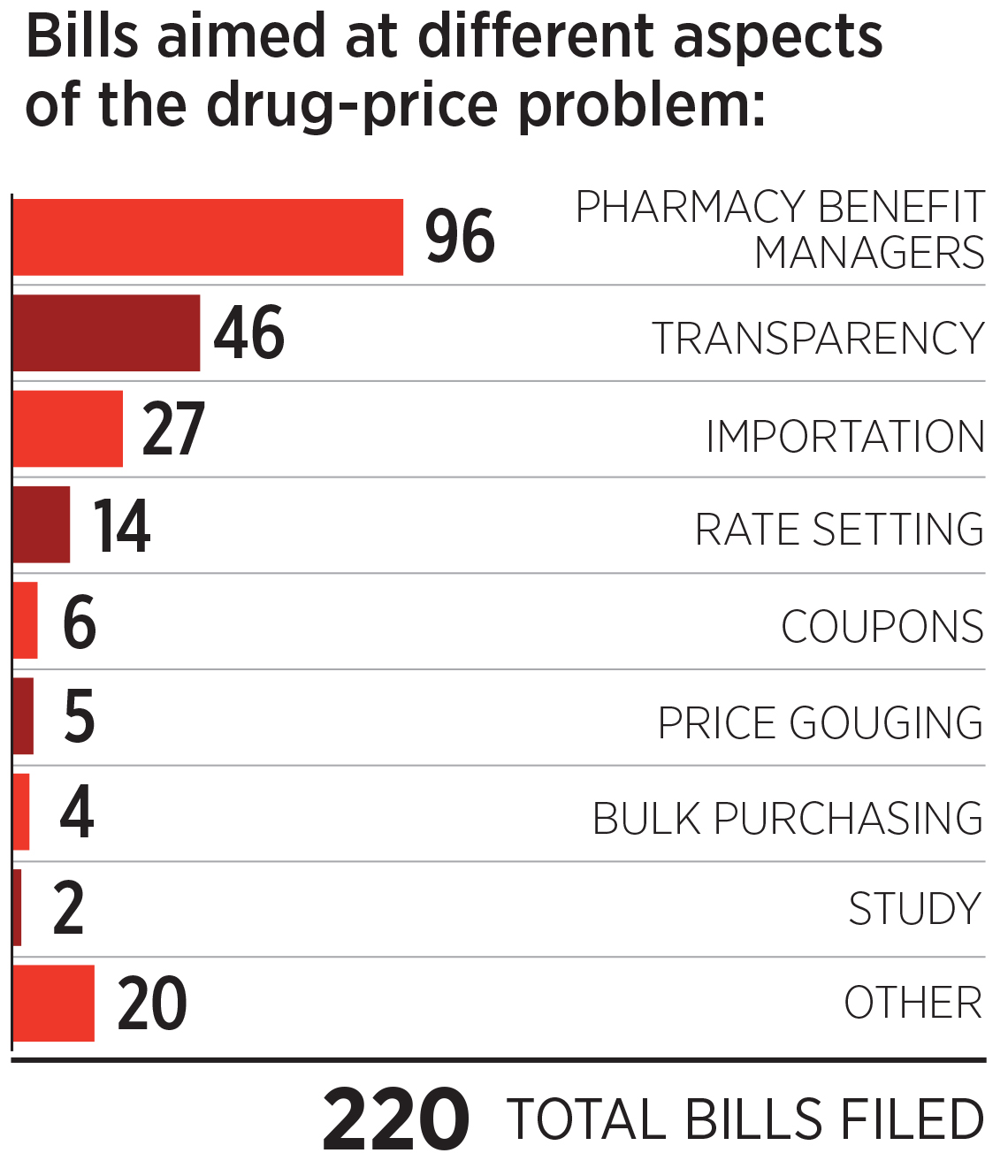 Some policymakers want to establish affordability commissions that would set payment ceilings for some expensive brand-name or biologic drugs. Insurers would typically not be permitted to pay more than the amount set for such drugs. These bills have already been introduced this year in 14 states, including Maryland, Minnesota and New Jersey.

The largest number of state bills filed in 2019 would regulate pharmacy benefit managers, the corporate middlemen that administer drug plans for insurers or companies. PBMs — often at odds with drug companies for their role in negotiating prices for insurers — have come under fire for pricing and other practices. Legislators had filed 96 bills in this area by March 29, according to the NASHP. Also popular are “transparency bills” that would require manufacturers, insurers or PBMs to disclose drug prices or other information.

In February, Florida Gov. Ron DeSantis made a splash when he proposed allowing his state to import prescription drugs wholesale from Canada. Vermont enacted such a law last year, and a handful of other states have considered this approach. But it requires federal approval, which Vermont has yet to obtain.

But importing drugs from Canada has its limits. “We can't rely on the Canadian health care system to fill all the gaps for us,” says Stacie B. Dusetzina, an associate professor of health policy at Vanderbilt University School of Medicine in Nashville, Tenn. “[Canada] may not have the supply to do so if more states decided that importation is a good solution."

California Gov. Gavin Newsom has another plan: leveraging the buying power of his state — by far the most populous in the nation — to negotiate with drug companies when buying drugs for the state Medicaid program, prisons and government workers, among other groups. Still in the proposal stage, the idea has attracted the interest of other states, which may join forces with California.

By the end of March, seven of the 220 bills filed in 2019 had become law. Last year five states approved new laws related to transparency. And 27 states passed laws prohibiting PBMs from imposing gag clauses that prevent pharmacists from telling consumers about cheaper drug options, says Katie Gudiksen, a senior health policy researcher at The Source on Healthcare Price & Competition. In an indication that policymakers at the national level can think along the same lines, President Trump signed two federal laws establishing gag clause protections as well.